skip to main | skip to sidebar

When I left Europe for China the main reason was that I wanted to put myself in real proximity to un-crowded alpine and Himalayan settings which was meant to make my pocket happier and my seasons fuller. I, as many others, came across Mick Fowler and Paul Ramsden’s trip report about their climb on the ice line of Siguninag 4 while I was in the UK and thought: “Damn! Cool but thanks no!” Then, a few months later, I saw the picture and I was hooked!

When I arrived in China the internet was my best friend till I met real people; some of them were kind enough to allow me to join their trip to Siguninag shan that following winter.

First thing I saw, the morning after we arrived, was her: the Fourth Sister! Right there I knew I want to climb that baby and I knew am in no shape for it…

We had a blasting time albeit adapting to China subtracted 12kg from my anyway diminutive mass, we got bogged down in deep snow while trying an FA, climbed icefalls that went down in the sun hours after we topped out, broke some fingers on the last day while convincing myself that running water is actually ice, and more – we became good friends, and I was in dire need of that. Also, in one sunny day, I trekked (actually rode a horse) with Bob to the end of the valley and there I found the gem – the NW face. It looked even better than in the picture! We turned around and I knew I’ll be back.

And back I went: to climb a North face with Bob in the valley next door and a South West face with Geordie on the peak itself.

Since then I met Leslie whom I knew, again, from the internet, and I knew I found my man for those trouser filling A4/5 pitches I was willing to belay and photograph…. The question was how to lure him? We climbed a couple of days in Turzii Gorge, back home in Transilvania, while we were both home during the summer months and he could not resist my charm...

Actually I think it was more because he never been to China before and our little trip was a good excuse for some intensive course in using chopsticks….

Geordie was out – the coward took a job that actually paid him to fuss around with college girls teaching them how to abseil in Borneo rather than paying a couple of grand to freeze his arse with me on a wall. Nusu was next on the line and all started to look like we were getting somewhere. [Last summer, during some horrendous weather in the Bucegi Mts., again back home in Romania, Nusu was the eternal Duracel-Bunny.] We needed that quality as to complement a team made of an old bear and a lazy pen-pusher, that is to kick us into other kind of action besides boiling coffees; plus I needed somebody to free climb the pitches I’d belay and photograph!

Leslie also called on board two young guns from back home whom I briefly met, again, last summer. I don’t know much about Liviu and Esposito (a chat around a bottle of Coke doesn’t count) but sure as hell I’ll be finding all I need to know about ‘em fellas by mid February! Oh - and from what I know, Liviu sounds like he might be the one to take on the ice pitches I could belay and photograph! Sounds like a plan! I'm sorted! Gotta go out and buy an ATC and some film rolls! 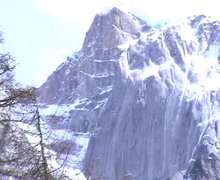 We don't have a link for Siguniang shan but we have a link for the closest town that is also a web-weather-forecast-entity as well.... You can check it at the bottom of each page in this blog.